Meet the Horses - Our 'Teachers'

We don't like to give too much away about the horses so you'll find out more about them when you meet them.  For now, here are some pictures of the herd. 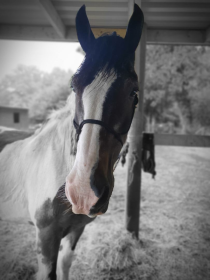 In the October of 1999, Sue, Hannah and Naomi went to look at a horse to become their first family horse.  Little did they know the journey that the horse they met would take them on.  Through their journey with Charlie, they started New Horizons and, in a sense, making Charlie its founder member.

Charlie was a calm and passive leader of the herd, and helped to show many of our learners how you can get results without having to get angry or cross.  He loved working with children and, as big as he was, he would happily be led around by a small child (but he might be more of a challenge if you were an adult!).  He brought up and taught the younger horses in the herd and was adored by all.

Unexpectedly on Tuesday 19th January 2021, Charlie didn't seem to be walking properly and the vet was called to assess him.  The prognosis wasn't good but the vet gave him various medicines to see if it made a difference however, the following day he was no better and we had to say goodbye to him on Wednesday 20th January 2021.  The vet concluded that he had developed a rare neurological problem called sidewinder syndrome to which there is no cure so, as hard as it was for us to do, we had to make the best decision for his wellbeing.

Charlie has left a huge hole in the hearts of everyone at New Horizons and will be missed hugely. 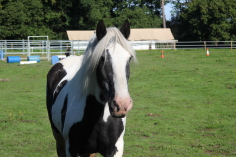 Patch joined the New Horizons team in September 2017 on loan from a good friend to live out his retirement.  He was an immediate favourite among our learners with his cheeky character and would happily stand for hours to be groomed.

During the long, wet 2017/18 winter, Patch's condition started to deteriorate and we, with insight and assistance from the vet, did all we could to keep weight on him and keep him going.  We wanted him to at least be able to enjoy the summer after the hard winter and we were somewhat successful with that.  Many learners had fun making his huge feeds and listening to him wickering at them to hurry up!

Unfortunately in the middle of August, when the rain started, his condition worsened yet again and the sad decision had to be made.  The New Horizons staff and Patch's human mum were all with him to say goodbye on 24th August 2018. 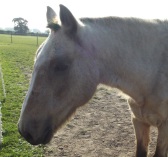 Harvey came to Hannah, Sue and Naomi in 2003 and taught them many lessons during the thirteen years he spent with them.  He was retired from riding in 2010 and he was very poorly that winter and into the spring/summer of 2011.  He seemed to pick up once New Horizons was started as if doing ground work with learners gave him a 'purpose' once more.

He was an asset to our team and was favoured among many of our learners and we love listening to the tales that they still tell of him.

Harvey always struggled with his weight and we sadly said goodbye to him on 12th April 2016, two days after his 32nd birthday.

COVID-19 Update
We are open and trading, but have various COVID-19 safety procedures in place.  There is hand sanitiser at entrance ways and staff have masks and shields should the be required.